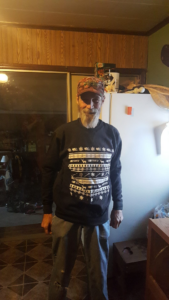 Age 61, of Burton, passed away at WellBridge of Fenton, on December 6, 2021. To honor his wishes, cremation has taken place. Those desiring may direct memorial contributions to the Juvenile Diabetes Research Foundation at www.jdrf.org/donate. Expressions of sympathy may be shared with the family on William’s Tribute Wall at detroitcremationsociety.com.

William Michael Dykes was born on May 28, 1960, the son of Mr. and Mrs. Raymond and Beaulah Dykes. He dabbled in many things through the years and was truly a jack of all trades; some of his hobbies included wood-working, watching NASCAR, and doing pig roasts for family and friends. He was kind to everyone he met; if you stuck around long enough, you were family, and if ever you needed something, he was always willing to help.

Left to cherish William’s memory are his daughters; Rachael and Christina Dykes, brothers; Richard, Chuck, and Brian Dykes, and sister; Deb Gray – as well as the large extended family.

William was preceded in death by his parents; Raymond and Beaulah Dykes, his wife; Karen (Baxter) Dykes, and his sister; Sue Sanders.