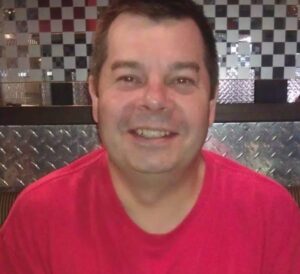 Age 54, of Glendale, Arizona, passed away on December 31, 2022. In accordance with his wishes, cremation has taken place. A Celebration of Life will be announced at a later date. Expressions of sympathy may be shared with the family on Robert’s Tribute Wall at detroitcremationsociety.com.

Robert Earl Petee was born on January 15, 1968, in Detroit, Michigan, the son of Richard and Camille (Careccia) Petee. Bob was a former resident of Livonia, MI, and a graduate of Stevenson High School. In 1998, he moved to Arizona to start a new adventure and married his soulmate, Carrie. Bob loved his family and had future plans to move back to Michigan to be closer to them, especially to his daughter, Nicole, and granddaughters. His career as an engineer was in the manufacturing industry which paved the way for his creative abilities beyond his day job. This included the honor of donating his skills to design and engineer a key prop for a movie. He had a passion for cars, music, playing golf, and watching football. Bob had a quick one-liner sense of humor which always had everyone around him laughing. He was one of a kind and loved by so many.

Bob is preceded in death by his mother; Camille Petee, his grandparents; Robert and Margaret Careccia, and Earl and Mildred Petee.