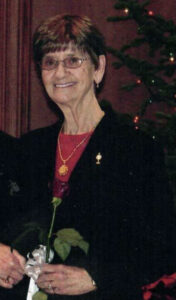 Age 90, of Grand Blanc passed away peacefully surrounded by her loving family on August 10, 2022. In accordance with Phyllis’ wishes, cremation has taken place, with a Celebration of Life to be held on Monday, August 22, 2022, at Holy Family Catholic Church, at 10 am, with visitation starting at 9:30 am. Expressions of sympathy may be shared with the family on Phyllis’ Tribute Wall at detroitcremationsociety.com.

Phyllis Marie Smith was born on July 10, 1932, in Flint, MI. She attended Flint Community Schools and graduated from Flint Tech High School in 1950. She met Bennie Ray Smith while working at GM Turnstead. They married on February 16, 1954 and had 7 children. Although Phyllis worked in the Flint area for many years, raising her children was her priority. Bennie and Phyllis retired to Arizona in 1979 and continued to be active in the lives of their children and grandchildren. In 2006, Phyllis returned to Michigan where she spent the remainder of her life surrounded by her family.