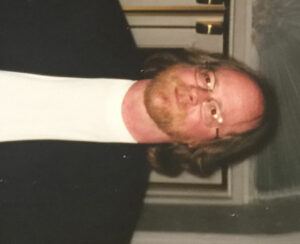 Jamie Gordon Latimer, age 58, from Mt. Morris, passed away peacefully at home on Monday, March 14, 2016, after a brief illness. Cremation has taken place.

Jamie was born October 5, 1957 in Flint, Michigan to the late Mr. & Mrs. Gordon and Yvonne (Spohn) Latimer. Jamie graduated in 1975, from Mt Morris. He married his high school sweetheart on September 2, 1978. He proudly served his country in the United States Army from 1978 until 1981. Jamie loved fishing, hunting in Wolverine, and his cat, Penelope; who never left his side.

Jamie was preceded in death by his father Gordon and mother Yvonne, grandparents and his faithful dog Joey.
Jamie was a “Jack of all trades, master of none.” A Celebration of Life Service will take place in the summer at Buell Lake.

Jamie’s family would like to extend a heartfelt thank you to the staff of Compassus Hospice and Hurley Hospital.