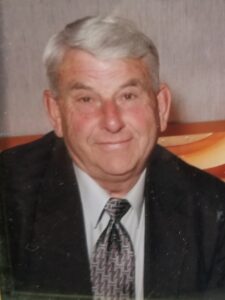 Our father, Jim Hickmott of Davison, passed away on September 16, 2022, at the age of 87. To honor his wishes, cremation has taken place. As per his wishes, only a private family ceremony will be held. Expressions of sympathy may be shared with the family on James’ Tribute Wall at detroitcremationsociety.com.

Jim Hickmott was born on December 13, 1934, in Ortonville, the son of Charles and Mary (Wilson) Hickmott.

Jim was a family man. He was quiet and humble as well as a jokester. We loved
his stories of the farm, little songs, and limericks. He grew up a farmer. After the family farm, he worked hard to build his own business, Hickmott Trucking and Bulldozing for over 30 years. After retirement, he was often referred to as the “lawnmower man”. He could fix anything that was mechanical (before computer chips). He truly exhibited the “hard work ethic” that is so often missing today. He instilled this in his children, and we are forever grateful.

Jim will be missed by all but never forgotten. We love you, Dad!

Jim’s obituary was lovingly written by his family.