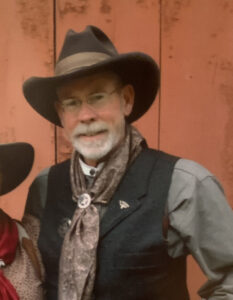 Age 83 of Flint, passed away Monday, November 1, 2021 at Courtyard Manor of Swartz Creek, Michigan. To honor his wishes, cremation has taken place. Memorial contributions may be considered to Alzheimer’s Research Association at www.alzra.org. Expressions of sympathy may be shared with the family on Edward’s Tribute Wall at detroitcremationsociety.com.

Edward was born on July 31, 1938, in Stoddard County, Missouri, the son of Raymond and Bernice (Carter) Smith. Edward received his Doctorate of Education from Arizona State University. He was a teacher and a Community School Director in the Flint Community Schools until his retirement in 1992. Edward enjoyed a passion for Cowboy Action Shooting and was a member of SASS. He was instrumental in starting the Wolverine Rangers in Michigan and was their first captain. Most of you knew him by his cowboy alias, Dakota Doc.

He was preceded in death by his son; Kurt Smith and his brother; Vernon Smith.

Burial services will be held in the spring in southeast Missouri.

Friends may share a memory with the family online at detroitcremationsociety.com.